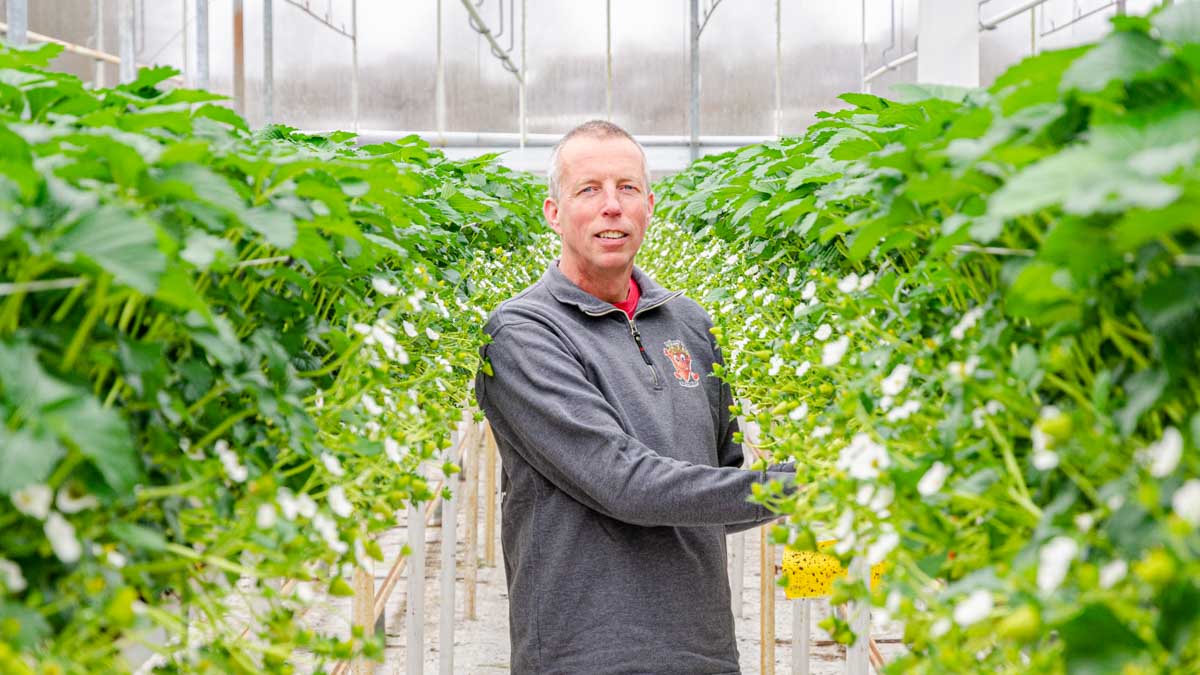 Richard van Dijk has been cultivating strawberries in a greenhouse of nearly 1 hectare in Pijnacker, the Netherlands since 2011. He has selected the Malling Centenary variety because of its sweet flavour and attractive shape. They harvest the strawberries between mid-August and October and between the end of March and mid-June. Most of the strawberries are sold locally in their shop as well as to local bakeries and restaurants.

Richard cultivates his strawberries using coir in troughs. He is also actively engaged in a project to make his plants more resilient. One key aspect of this is to achieve a low EC and using organic fertilisers. Furthermore, Richard uses Growficient sensors to monitor the water content, EC, and temperature in his substrate for the second year.

With Growficient, you’ll learn that at specific values you don't need to water the plants yet because there is still enough buffer.

What were the initial reasons for choosing Growficient?

Richard’s first concern was to understand the moisture levels of the substrate. This gave him a better understanding of how the EC in the substrate behaves. “You used to have the drain-EC, but in my opinion, that was not up to date. The sensors give you insight into the EC throughout the day”, Richard clarifies. “When we cultivate drier, the EC rises, especially when you don’t give a lot of water in the winter, so you might only have drain once a week. So what is the EC in the substrate then? That was one of my questions”.

Because Richard is often abroad during the winter, the sensors provide him with extra ”eyes” in his greenhouse to monitor the substrate remotely. I can see what my EC and moisture levels are at any time and whether I need to give water or not”, says Richard.

How do you use Growficient?

Growficient is essential in wintertime, but also during the rest of the season: ”You can keep a close eye on the graphs. Is the water level still optimal? Is the substrate drying out rapidly? Should we give water earlier? You have an additional element of control”.

He also indicates that he can learn from the data what he should or shouldn’t do on specific days. It offers extra control, and you learn from using the data. “You still have to see for yourself if it happens as you want it to, but you have additional control”.

With the graphs you can keep a close eye on what happens. It gives you an additional element of control.

What are you doing differently now that you are using Growficient?

“Achieving a lower EC and being able to steer on that. If we look at the data and notice that the EC is above 1.5, then we just lower the drip-EC”. Richard explains that they used to give water based on their intuition: “You lift up a trough, and you know it will be sunny, then you give some extra water. If you take a handful of coir from the trough and squeeze water out of it, does it feel moist? Or wet? You cannot determine what the exact water level is. With the sensors, however, you can. When you reach certain levels, you learn that you don’t need to water yet because there is still enough buffer”.

Malling Centenary is a phytophthora-sensitive variety, meaning Richard doesn’t want to cultivate too wet. The sensors help him to maintain that control.

When asked about his opinion of connecting Growficient to his climate computer, Richard says he prefers to keep the dashboard as a separate monitoring tool. He believes, however, that it will be possible to control the dry-out using the sensors. This could then become one of several factors that the computer adds up before deciding to give water”.

To conclude, Richard says that his plants never looked as good during this cultivation phase as now. He mentions the use of Growficient in combination with resilient cultivation as the cause of this.